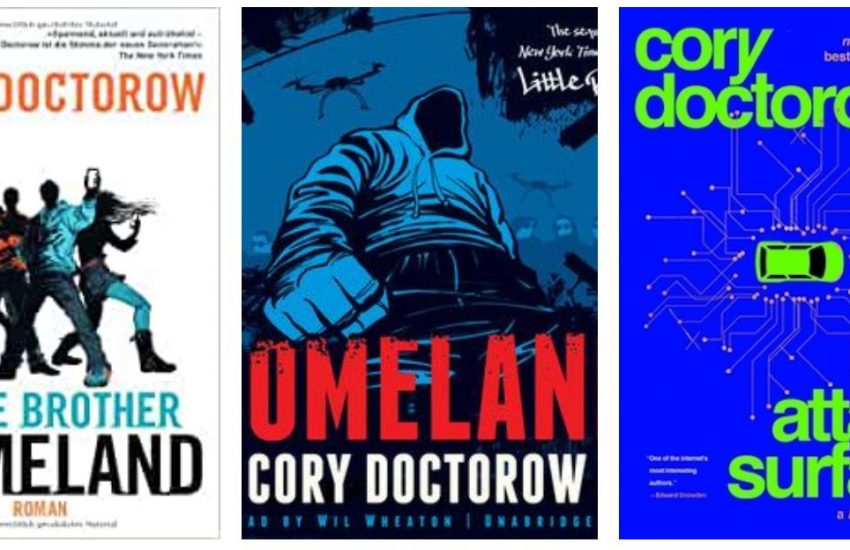 Cyber Security is a team sport. And it doesn’t have to be a dull compliance ridden affair with death by powerpoint, click-through web based training and mindless acceptance of each and every concept by rote.

I just absolutely blazed through Cory Doctrow’s Little Brother novel series including the latest (potentially stand-alone more adult- focused) Attack Surface. I consumed the entire trilogy in a week by listing to the audiobooks on 2-3x speed and with a smartspeed feature that removed silences in speech. I did this because of how compelling the content was.

By using fiction to deliver the lessons he was able to make it a delight to consume all of the content and compelling to do so! He covered topics such as security, information and cyber security, offensive and defensive applications of it, hacking and political organizing through and for better security.

Doctrow through his characters educates us that the cyber-security defense is a means to an end. A tactical method to allow us the time and space to work for a world where we use our governmental systems to protect the vulnerable against the powerful.

What if it happened again? On September 11, 2001 the twin towers were collapsed for all the cameras to see, over 3 thousand Americans were killed and America changed forever. We invented the Department of Homeland Security. We expanded the National Security Agency, we began programatic collection on all Americans without warrants. We launched wars, we expanded domestic police powers. What if it happened again? More effectively?

Maybe the DHS would occupy the city where it happened. Maybe they would “detain” and “stress-interview” teenagers who were nearby. Especially those that were cutting class or looking brown.

How could we retain our nation? Our liberties? Our Constitution? How could we prevail upon the better angels of the nature of a governor to use the state police to arrest and expel Federal agents for their unconstitutional detentions, surveillance and torture?

How could teenagers do it using hacked X-Boxes that look like game machines but are really paranoid-linux boxes coordinating nonviolent resistance?

All this and more imagined in this book!

What if there were an America where the police behaved like a (bad) military? Where they kettled protestors into tight quarters, gassed them with tear and pepper gas, beat them with sticks and tasers, causing violence and stampedes in peaceful protests? Regardless of children or old people in the crowd? Regardless of the protection of the people peaceably to assemble? What if this behavior were published in high definition video? What if the police held citizens without lawyers for days, bound them hand and foot, packed them covered in vomit in busses then cells, without phone calls or legal advice or due process, and then just released them without charges to avoid the scrutiny of trials?

Oh. Thats all happening very obviously in the summer of 2020?

OK well:
What if a shady mercenary corporation got absurdly wealthy on government contracts in a forever war in Iraq and Afghanistan and started selling bonds against those future earnings, then took it further and created derivatives and acquired huge parcels of student debt that cannot be discharged even in bankruptcy, then leveraged this cash to lobby politicians in federal and state governments to grantee their ability to pursue the broke students who took on this debt and graduated into a chronically depressed economy with record high unemployment? Pursuing their social security and that of their parents and grandparent if they move back in with them?

What can we possibly do against this? I dont know for sure. I think it has to do with better communication, better politicians, better accountability, less secrecy for the powerful and more for the oppressed. Reading this book can give some ideas on how to try to balance it.

Attack Surface by Cory Doctorow
My rating: 5 of 5 stars

Masha signed up to catch terrorists after they attacked her hometown and built better technology to do it than anyone else she came into contact with. Then those same tools were targeted at her childhood friend for supporting a Black Lives Matter organization.

What is patriotism? How does it differ from authoritarianism? What are the trade-offs between security and surveillance? How does someone begin by hunting terrorists for attacking their hometown and killing thousands, and end up supporting despots in former soviet failed states for cash from their massive military contracting employer? What do we do if the technology we build to catch truly bad people are inevitably turned on our friends

How much can one person influence events of a massive powerful system in which we find ourselves all swept along? When it seems the elite and powerful will always retain power is it rational to fight it? Or is it more rational to carve a space on the couch in the antechamber of power to survive between the elites and the masses?

This book asks these challenging questions. Yet it is replete with tactical guidance on patching, use of encrypted communications, checking binary transparency reports, defending against the evil maid attack on physical access with nail polish on laptop screws and photos of the patterns. The detail is dizzying. The scope is ambitious. The challenging questions are provocative.

But Doctrow through his characters educates us that the cyber-security defense is a means to an end. A tactical method to allow us the time and space to work for a world where we use our governmental systems to protect the vulnerable against the powerful. The arc of history is long, but it bends toward justice… but not on its own, we have to BEND it. Crank on it relentlessly until it bends finally to justice. Tech is the amoral force that can serve either side. We must make it bend.

5 Star reviews mean I loved it, will read it again, recommend it for anyone, AND it changed my mind about something important.

View all my reviews

Tech is the amoral force that can serve either side. We must make it bend.